Ya know when you finally decide you want something, and you think you’re gonna just bite the bullet and get it, but then a bunch of stuff happens and you never get around to actually purchasing said item, but then it’s Christmas time and your mom buys it for you anyways?

Because that’s how these pretties ended up in my possession…

And I LOVE them.

I will say, that when they arrived, there were a few surprises.  Not necessarily bad surprises, but just aspects that I wasn’t expecting.   First, the “wood grain” that they speak of is not on the legs as I’d assumed.

It’s the texture on the seats…

At first, I was sort of put off by this as I was expecting smooth plastic, but it’s actually kind of grown on me and now I’m totally fine with it.

The second surprise was that it turned out that the wood legs are much lighter than they appeared in the pictures online.

I was expecting more of a walnut tone, but they’re almost blonde.   They’re not offensive by any means, Thus, I’m living with them as is right now.  I might consider darkening them with Polyshades at a later time… or possibly even lightening them with the Sunbleached Polyshades that I purchased in this post to make them blend more with the table.  Right now, they’re slightly more yellow than the table.  I’m not sure if you’ve gathered this about me by now, but “accidental yellow” isn’t really my thing.  Either way, something will eventually get done.   I’m fine with them for now, though.

Functionality-wise, the chairs are pretty comfortable.  And they’re lightweight which is nice.   The one issue we’ve had so far was that Lucas sat on the edge of a chair, and it tipped right over.    Hopefully, this isn’t an ongoing thing with stability.  It’s only happened once, so maybe it was random.

In any case, stylistically,  they’re EXACTLY what I wanted for this space.  I can’t wait to show you!!!  But before the grand reveal, let’s take a look at the evolution of this space, shall we??

After moving in, the nook consisted of a mish-mosh of stuff we had from our last house.  And the layout confused me as the lighting fixture wasn’t centered (It was too close to the doors, so a table couldn’t be directly underneath it while still allowing the doors to open) and I wasn’t certain of the traffic flow as of yet, which lead to this uncomfortable weirdness…

After a few months, I realized that a table could easily be centered and still allow adequate flow in the space.  We installed a new lighting fixture and swagged it farther away from the door so that it could be hung directly above the table… 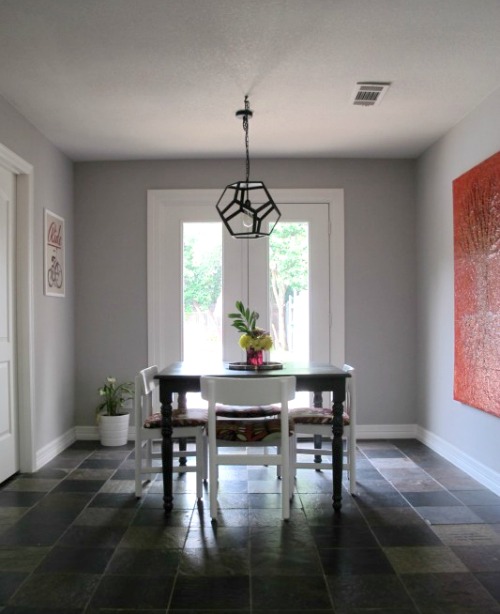 Next, I found a beat-up pedestal table for $40 on Craigslist and refinished it a lovely sunbleached color.  I’m still completely enamored with how it turned out.  Plus, the circular table GREATLY improved flow and the pedestal helped to reduce visual clutter in the space….

But those red bird chairs, just weren’t doing it for me, so as an interim step until we could afford new dining chairs, I recovered the seats with a neutral fabric (and added a thrifted pot and awesome sauce vintage shoe mirror)…

And now, the piece de resistance, the cheese to my macaroni, the peas to my carrots… Our new dining chairs…

I have to say that I’m pretty happy where we’re at right now with this space.   I love the dimension and style that the chairs offer.

And the black metal accents on the chairs really tie into the lighting fixture nicely. 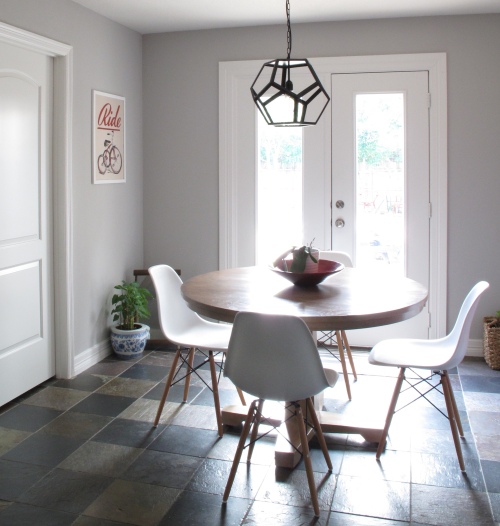 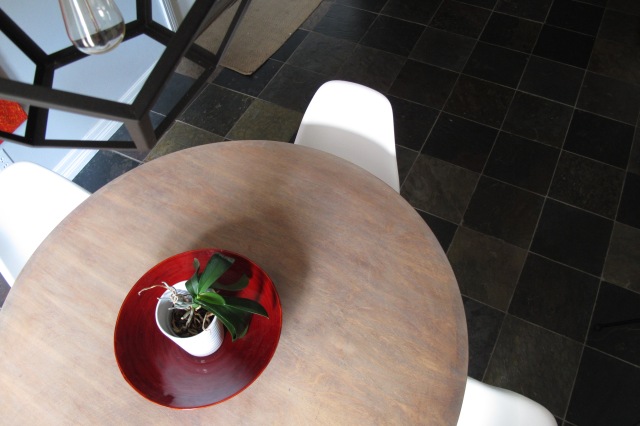 Heart bubbles are coming out of my eyes right now.

Anyhoo, now that this area of the room is close to completion, we’re hoping to set our sights on the outdated kitchen portion of the room that I’ve conveniently not included in these shots.   Hopefully soon we’ll be getting estimates for new countertops.   Then, FINALLY we’ll be replacing the appliances.

So, wish us luck with that!   In any case, we’re LOVING the breakfast nook where it’s currently at and can’t wait to create a a kitchen that compliments it.

You guys have a great weekend and stay warm!! 🙂