Seriously, y’all. I was just starting to think that this holiday season hated me. First, the cancellation of our Christmas plans due to illness, then the cancellation of New Years plans for the same reason. But, THEN, a sweet man named Bernie allowed me to ring in the New Year with a huge smile on my face.

Ya see, ironic timing seems to be my forte. That morning, our living room looked like this…

I’ve mentioned several times that I was either going to paint the TV stand white or find a cute, midcentury unit of some sort to replace it. Well, after months of searching, I’d finally resigned myself to sticking with our current media unit and painting the stand white. So, I did. And wouldn’t ya know, no sooner had I mentioned to Joey that the stand was dry and we could move it back, I came across this ad….

Say, whaaaaaaaaaaaaa???? A gorgeous, long and low, midcentury dresser plus mirror for $125!! Lately, it seems that this completely unheard of, at least in our area. Most midcentury dressers in this particular style were going for at LEAST double that. In fact, I’d just visited a vintage shop a day earlier where dressers not nearly as pretty were being sold for around $500.

I instantly called the number listed in the ad and left a voicemail letting the seller know that I loved the dresser and could pick it up that day if it was still available. Even as I was leaving the message, though, I knew that my chances of actually getting it were slim. I mean, he’d posted the ad a day ago. I was sure someone had snatched it up already. That’s how competitive the market is down here for midcentury dressers. They’re gone almost instantaneously.

Sure enough, the seller, named Bernie, called me back and told me that the ad had generated quite a bit of interest and that he already had an extensive waiting list for the dresser. He told me that if the other people on the list before me didn’t take it, he’d call me back. And I lost hope. I told him that I really loved the dresser, and that if he’d choose me, I’d treat the dresser like family and give it a great home. I told him how much I value pieces like this. Then, I offered him $150 for it. He told me thanks, but no… He couldn’t do that to the rest of the waiting list. I thanked him for calling me back and wished him luck.

And that was it.

So, imagine my surprise when about 3 hours later, my phone rang. I nearly dropped the phone when I saw his number on the caller ID. I frantically answered with all fingers crossed. He said that if I still wanted the dresser, it was mine and I could pick it up that day. I pretty much shrieked with glee. I didn’t know what had changed his mind, but I was grateful regardless. We drove to Bernie’s house minutes later and loaded up my newest family member. And he wouldn’t even take the $150 that I’d offered him on the phone. He insisted that I only pay the asking price of $125. Sweet, sweet man.

He said that he’d had over half a dozen inquiries about the dresser since he’d posted it the night before. I asked him why he’d chosen me and he simply shrugged and stated that it must’ve been meant to be that I were to have the dresser. He seemed very relieved when I told him that I planned to keep the dresser original. We discussed how I planned to restore it to camouflage the wear and tear. And he made me promise to give it a good home, which I readily did.

And we took her home.

Here she is all shined up with some Restor-a-Finish and Feed n Wax (this is the iPhone shot that I sent my mom to introduce her to her new “grandchild”… Nicer pics to come!) … 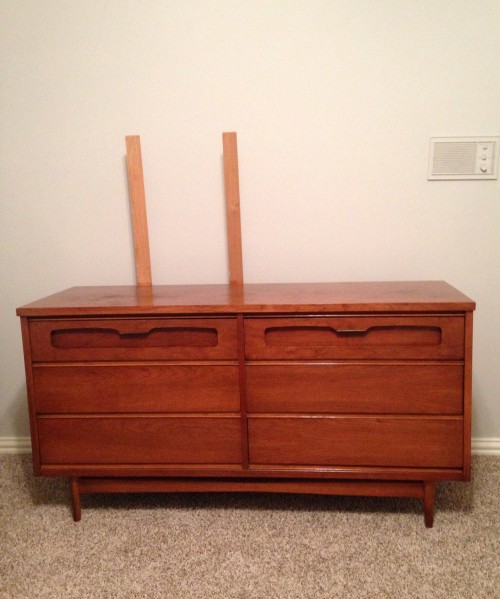 Restor-a-Finish and Feed n Wax are the cat’s meow.  The bee’s knees.  These products are amazing for covering small knicks and scratches and adding back shine and richness to wood.  I’ve used them on every single piece of wood furniture that I’ve acquired… and they never cease to amaze. Even Joey was singing their praises after I shined up this guy. I will say, though… Reapplication is needed after a while. I noticed some of the old nicks reappearing after about a year on good ole’ Drex (not to the extent that they were before, though). Once I reapplied the products, they disappeared once again.  I think once a year is a totally acceptable time-frame for treating wood, so I’m not complaining. I still think these products would walk on water should they suddenly sprout legs and sing a tune.

To prep the piece, I simply wiped it down with a damp rag and a bit of elbow grease. I’ve learned through trial and error (and research) that chemicals are bad news for many of these pieces as they can eat through the antique finish. For the larger bits of paint and caked-on dirt that remained, I used a magic eraser. I was very careful to not rub away the finish (as magic erasers can… I know I’ve used them on pieces in the past, but I soon learned that they can dull the finish. They act almost like a fine-grade sandpaper. Mistake noted.  So, using a Magic Eraser sparingly on obvious areas of dirt or paint is super handy, but I don’t recommend using it on the entire piece.).

I’ve reviewed how to use these products before, but for any newbies, I simply followed the directions…. Rub on the Restor-a-Finish with a lint-free cloth (I use cut-up old, stained t-shirts of Lucas’s that he’s grown out of and that nobody else would want), rub off the product immediately, wait 30 minutes.  Rub on a generous coat of Feed n Wax, wait 20 minutes, buff off excess. And done. Super easy.

Anyways, those wood pieces sticking up on back of the dresser in the shot above are for the mirror (which we removed for transport). We’re leaving them attached until we’re sure that the dresser will be our media unit. I wanna try it in the space first to be sure it feels “right”. If not, she will go in one of the spare bedrooms with the mirror as originally intended. Should the dresser become our media unit, we’ll adapt it for our equipment by drilling ventilation holes in back for the media components and getting an IR remote extender so that that remote controls will still work with the drawers closed.

All I can say is that I was on cloud nine that entire day (and future days). I feel like our little mid-century dresser family is complete. Stay tuned! I’ll keep you updated on how this story unfolds….

So, enough about me…. Tell me about your New Years! Any new finds that you’re super excited about? Christmas gifts?