Hey ya’ll! Sorry for the radio silence lately. Things have been a little, um… washy-washy on the design front lately. And here’s why…

In short, I’m having a “we bought a money pit” kind of month.

Allow me to explain… Since moving into our house we’ve had quite a few hiccups. For example, things that were hidden from our inspector, like a leaky roof that was covered up but never actually fixed, mold under the covered porch that was painted over, plus a bunch of other little things that were, for lack of a better word, half-assed.  Then, there were straight-up surprises like when we discovered that our HVAC system ducts were completely riddled with mold or that our back wall was rotting. This was on top of the stuff that we knew about, like the insulation in the attic being bad, the windows and carpeting that needed to be replaced, the exterior that needed to be painted and the pool that needed to be resurfaced.   We knew a lot of what we were getting into when we bought the house, but between the pricier issues that we were aware of and the surprises that we didn’t, it’s been kind of an exhausting year. We know that with old houses things like this should be expected, but that doesn’t make them any more fun to deal with.

We’re pretty good at saving money and budgeting and we’d been saving towards a renovation budget for a long time before purchasing this house because we always wanted a house like this. But, holy moly. When you buy a house that had been neglected for as long as this one (and/or practically pieced back together with scotch tape like ours was), you can expect to spend way more than you were planning. So, where am I going with this?.   Well, allow me to explain….

Last we left off here on the ole blog, we’d extended our fence and swapped out a ceiling fan. Next stops were supposed to have been buying a new shed (and, thus, clearing out our garage in preparation for the start of our kitchen makeover) and then purchasing new appliances to kick off the kitchen happenings.

You guys.  We were there.  We were SO there.   I could practically feel that smooth, shiny, functioning new range beneath my fingertips. The glorious, counter-depth fridge. The dishwasher… Oh! The dishwasher! If you’re new to the blog, know that our appliances have not worked well EVER.   Our stove works intermittently and will turn off in the middle of cooking something.  The burners are so uneven that I’ve had boiling water slide off the burner and into the middle of the stove just from the vibration of the water.    I’ve tried replacing the burners, but the openings are an irregular size, so replacing them just made the problem worse.   The dishwasher stops working upon occasion as well and leaks sometimes and the microwave doesn’t stay shut unless we slam it.   We’ve been trying to save for new appliances for about a year, but every time we think we’re ready, something else goes wrong that we have to spend the money on.   So, ya’ll …  We were THERE.   The plan was that we were gonna jump on the Labor Day sales and order our new beloved appliances then.

But, about a month before this happened…

Our second mature pine tree since May went to the giant forest in the sky.

We called out an arborist who inspected and told us that the deaths of our trees were being caused by wood boring beetles. They’d nested in the trees about a year before when the previous owners stopped watering due to a busted sprinkler system. The trees were in a weakened state, so the beetles took advantage. They’d laid their larvae inside the trees and when they hatched, they’d fed on the trees’ nutrient layer rendering them dead.

And we were at risk for losing the other 4 mature pines on our property if they were also infested. So, we had them treated. Which wasn’t cheap. But we needed to do it. A large part of why we fell in love with the property was the foliage. We had to try.

We saved some money by taking down the tree ourselves. 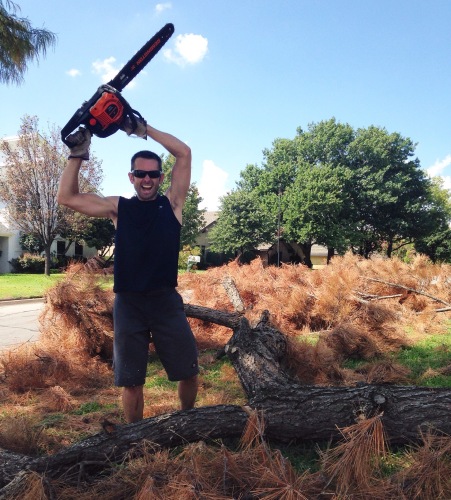 Well, Joey did it. I got home and he was standing atop the flattened tree all king-of-the-mountain style boasting a grin of triumph.

So, with that done, we worked to replenish our savings and began again researching appliances to get going on the kitchen makeover.

And I was ridiculously excited about it.

My mistake was telling people a that “as long as nothing goes wrong”, we were buying new appliances.

I can’t BELIEVE I said that.

I kid you not, the very NEXT DAY we walked into our backyard and it was covered in carpenter ants. Not joking. They were everywhere. So, we called out a pest control company. During the pest guy’s inspection, he found not only carpenter ants inside our house, but with one swift glance into our attic immediately exclaimed that we also had rats “and big ones by the size of their burrows”. Double ugh. He showed me the tunnels that they’d created in our freshly blown, brand new insulation and a few fresh droppings. Awesome.

So, obviously (after speaking with Joey) we agreed to treat that, like, IMMEDIATLY. So, the pest control guy set about doing his thing. And just when I thought everything was cool, he walked back inside and started talking to me about termite treatments. Why?? Because he’d found termites in our trees while he was spraying for carpenter ants.

This was the part where I gazed at him with a turbo death-stare and stated “You’ve gotta be friggin’ kidding me.”

TERMITES!!!!!! He showed me the tree and the mud tunnels. He broke one apart, and there they were. Live flipping termites. Ugly maggot-looking nasty things. 15 feet from our house. And given that our house was built in 1975, before code required that stucco be a certain distance from the ground, our stucco was actually IN the ground, thus, we could actually HAVE termites in our home and have no outward signs until it’s way too late.

Greatness. So, our $200 bill for carpenter ant treatment climbed to an almost $2000 bill to treat carpenter ants, rats and termites. And this was not counting the tree treatments from a few weeks back. Between this and our rotted wall from a few months ago, it’s like the House Gods were up there twiddling their fingers, deciding on the most boring ways they could possibly make us spend money. Ugh.

As for our house’s decor, I feel like I’ve reached the point where I’ve exhausted all of the items I already own. And it’s time to work on finishing the spaces with new stuff. This house is larger than our previous homes and has more wall space due to the closed-concept layout, thus, we still have a LOT of blank walls and areas that aren’t “right” yet.  Because the rooms are bigger, they still feel a bit empty to me in person (namely Lucas’s room and ours).   And my taste has changed subtlety to where I feel like I need to freshen things up with updated elements. But, that takes money. And our money has been spent on many boring things that cannot be seen. Ughughugh. Thus, my motivation to blog lately has gone down. Hence, the break.  I’ve worked on a few new things that I want to eventually cover (I’ve alluded to these in previous posts), but they aren’t right yet either. That’s the issue for me with working with mainly my old stuff and/or a few cheapo thrifted things…. My taste has evolved so nothing feels “right” within those constraints. Even with a DIYed twist or two.

So, really…. What I’m trying to say is that in the two years that I’ve been doing this, the one thing I’ve learned is that blogging (for me) can’t be forced.  I love to write. I love to decorate. I love having a record of my progress to look back on. And I LOVE it when you guys take the time to chime in.  But I HAVE to have good content that comes naturally. Otherwise it just ain’t real. And I’m not okay with that.   For the past two years this has never been an issue for me… Which is why I recently passed my 200th (!!!) post mark.   But, if I occasionally have small breaks in the future due to issues like the ones described here, I hope ya’ll will be patient with me.  Having an old, previously-neglected home is a new thing for us and we’re trying to field the punches as they come.

So, cross your fingers that our home stays healthy and intact for a while, so that we can get back to the fun stuff and I can gain a little momentum. I’ll be hopefully blogging more regularly again soon. Thanks for being awesome.