A while back, while I was at Marshalls, I found this little guy on clearance for $4.   (Sorry for the pic… I forgot to snap a before pic and this was all I could find.  Newbie move.).   The flowers that resemble bed head were not included.   Sadly, they were my doing.   Ill be honest, he’s not my typical style but he was cute and cheap so I rescued him and named him Larry. 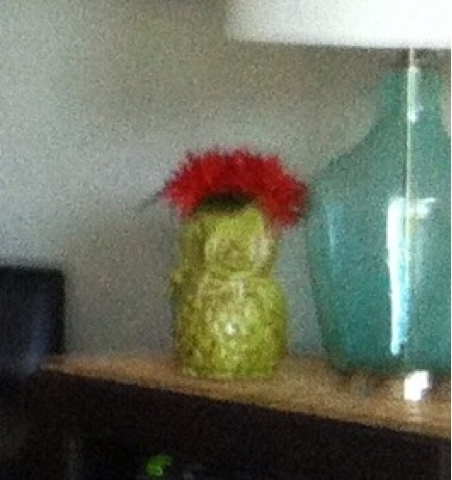 For a while, Larry lived on our DIYed bathroom shelves (stay tuned for those), but then I decided that I actually wanted to use him.  You see, as indicated by his luscious locks of flowing, ‘er spikey, flowers, Larry is not only a friend, he’s a vase.  I know.   I wanna meet the genius who came up with that, too.

It’s hard to tell from the photo, but he is not solid green.  He’s green with brown in the crevices.   Not bad, but again, not really our style.  He was a bit of a country owl, if you will.

So, I cleaned him really well with soap and water, wiped him down with white vinegar to remove any remaining greasiness, and let him dry thoroughly.   Then, I whipped out my paint + primer spray paint.   This was the Krylon Dual in Gloss white.   I gave him several light coats, (as below) leaving 5-10 minutes of dry time between each.

And this is what I was left with…..

I always let spray-painted items sit untouched for at least a day or two before using them to allow them to cure. Nothing is more frustrating than spending time making something look pretty, only to smudge it up by using it too early.

As an added note, one tip that I learned the hard way is to ALWAYS read the directions on the can when it comes to any paint, stain, lacquer or spray paint.  Believe me.  This concept has taken me YEARS to figure out.   The Krylon Dual spray paint that I used for this project recommends painting within two hours OR after 48 hours.   So, if you miss your two hour window, you MUST wait 2 days.   I learned (after NOT reading the directions) that if you paint within this window, the paint has dried too much, but not enough.   So, the layers you’ve already painted will buckle up and wrinkle when they come into contact with wet paint.  This was not the look I was going for.    Ugly-cry face *may* have made an appearance that day.

As for where Larry lives for now….

One thought on “Say hello to my leetle friend…”