Before we moved into our current house, I’d never really utilized Craigslist. Sure, I’d gone on there and poked around, but when it actually came time to contact someone about an item, I froze, talked myself out of it, and slowly backed away from the computer. I guess you could say Craigslist intimidated me.

When we moved into this house, we realized that a lot of the stuff that worked great in our last house, just didn’t work here. This house has a completely different layout than our last, higher ceilings, less usable wall space, and smaller rooms (although more rooms total). It’s just different. So, we found ourselves buying new stuff that did work, which left us with a garage full of decent stuff that we couldn’t use. It was a weird feeling for a cheap-o like me. I mean, we’re buying new versions of things we already have??? We can’t use what we’ve got?? Strange.

After a few months of *buying*, we decided that (1) we needed to stop spending as much money on the house, and (2) we had way too much unused junk. So, we developed a plan…

We were only allowed to spend money on the house that we made by selling our old stuff on Craigslist.

This plan would serve two purposes: First, it would save us cash. Second, it would effectively clear out our garage (without us having to move anything). So we got on it. And stayed on it. And it’s been fun to meet some nice people (albeit, briefly) and get a glimpse of what they planned to do with our stuff. Win-win-win.

It’s been about 2 months now and our plan has been working amazingly well. We’ve sold almost everything we wanted to (in the house, anyways… Now, to the storage unit!), and we’ve been able to do a lot to the house (especially in the backyard) without spending any additional moolah.

On the flip-side of Craigslist, I’ve also made my very first Craigslist purchase since moving in (followed by a few more). Our beloved rattan coffee table. My maiden voyage into CL purchasing. I had searched for months for a coffee table that was unique, linear, with a glass top that had no sharp edges, and was not precariously balancing atop a smaller base (for the safety of Lucas). For less than $75. Then, I found it…. 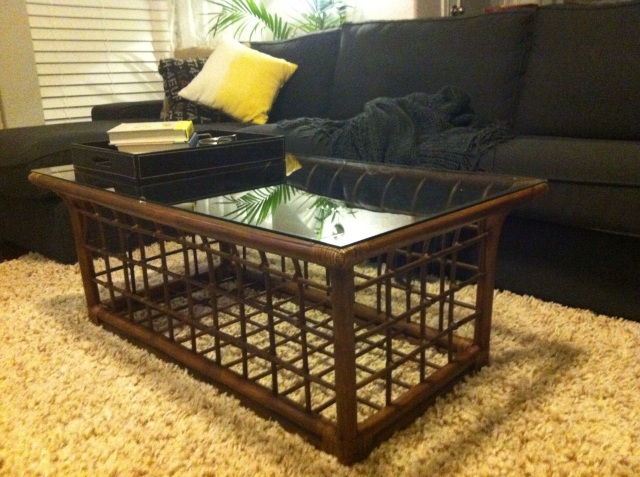 The nice man sold it to us (along with a coordinating end table which is in our bedroom) for $60. Oh Craig, you beautiful genius.