…this is a daily conversation in our house. Lucas dislikes nicknames and for whatever reason my first instinct is to call him “Pumpkin”. Not sure why. It just comes out. And he corrects me with his given name every time.  I just love that kid.  Anyways, speaking of pumpkins, we bought a few this weekend at a local pumpkin patch.

As we were leaving, Lucas swooped in like a superhero, grabbed the cart from me and stated “I’ll take care of that!”…

When it came to decorating the pumpkins, we decided not to carve them this year since they go rotten so fast (at least ours always have) and the thought of Lucas wielding paints almost caused my brain to short out.  Upon inspecting my craft box, I came across a jar of Mod Podge that had been long since neglected. Perfect! I raided our stash of tissue paper and came up with red, orange, green and pink. Pink made the cut because of Lucas. Occasionally, we’ll be sitting in silence and he’ll randomly state “I like pink.” You can tell he’d been thinking quite intensely about it. And it cracks me up every time.

I decided that we needed some bat silhouettes for a Halloweeny vibe, so I folded the tissue paper into small squares, then folded that in half. I googled “bat sillohuette” and chose a pic I liked, then I sketched half of the bat on the paper right along the fold. Like, so…. 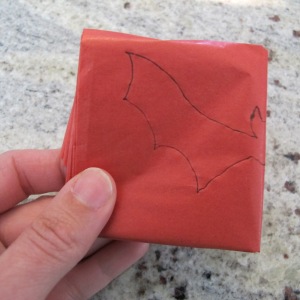 I cut it out with scissors, unfolded it and behold! I was left with many symmetrical bats. 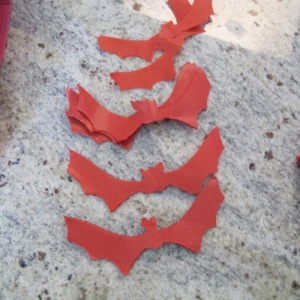 I did larger bats in green and smaller ones in red. Then, I cut out circles and triangles with the other colors.

I set up our supplies…..

Then, we got to work. We used foam brushes to smear the Mod Podge on the pumpkin,

We placed on our tissue paper and patted it down gently to be sure it adhered, 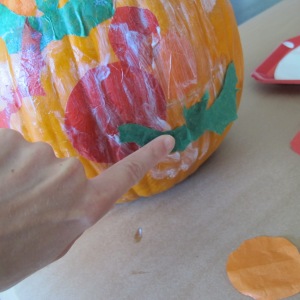 Then, we added another coat of Mod Podge on top of the tissue paper. It worked better when we waited a few minutes before Mod Podging the second coat. If the paper became too saturated while it was still mobile on the pumpkin, it tore more easily.

We just decorated our pumpkins randomly. Whatever floated our boats. I’ve always liked homemade-looking pumpkins. I can see the fun that was had decorating them and that makes me smile.

As for Lucas, he LOVED this project. It kept him occupied for much longer than we’d expected. He painted on the Mod Podge easily and did a great job adding paper. In fact, he loved it so much that when his pumpkin was done to his satisfaction, he started working on the back of Joeys. And he was quite the brush hog. Who knew??! I really need to do projects like this with him more often. I did have to go back and Mod Podge over his tissue paper once he was done since he didn’t seem to have patience for that part, but all-in-all it was a two-year-old success! And I’m hoping that maybe the Mod Podge will help preserve our pumpkins so they last a little longer. 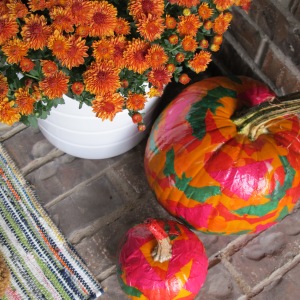 And the rest of the porch…

I have to say I’m proud of myself for decorating the porch. BEFORE the first fall holiday.  I still want to make a wreath for the front door, but at least there are signs of life now. Our porch says “Hey, hot stuff. People LIVE here.” Not that Mat didn’t. It’s just more obvious now.   Flowers, a few pumpkins, and (gasp!) I cleaned the chair. Did you know it’s actually black? I’d almost forgotten.  These simple additions are definitely not ground-breaking, but a happy improvement from this for sure… 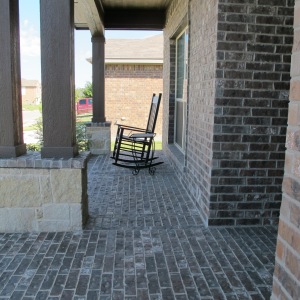 So, next we’ll hopefully be replacing our light fixture (spoiler alert: we bought it about a month ago. It’s been holding down the fort in the garage ever since.) I’ve also been casually looking for a second rocking chair and have been trying to narrow down a paint color for them. At this point, it’s anybody’s guess.

So, does anyone have any other toddler-friendly pumpkin-decorating ideas they want to share?