Why is it that I feel like I’m either writing about DIY or a tribute of some sort?

Suffice it to say, it’s been a pretty rough seven months for our family. First, the very unexpected loss of my brother in November, then the passing of Billie, our family pup of sixteen years, and now Nanny. My grandmother.

She’d had some health issues over the last few years and was in the hospital for the last few weeks. There were ups and downs throughout her hospital admission. And then last Tuesday while I was at work, it came.

The fact that it wasn’t completely unexpected definitely didn’t make it suck any less.

A day and a half later I found myself on a plane to New York for the services. And this is where I’ve been for the past 4 days.

I’ve never really talked about my upbringing on the blog (aside from that which related to my brother), but here’s the abbreviated version. I was born on Long Island, NY and lived there for the first 12 years of my life until my dad’s job relocated us to Texas.

I come from a very loud, very large Italian family. Picture My Big Fat Greek Wedding but with Italians. My mom is one of nine and my dad, one of three. Between the two families I have 25 first cousins and 8 second (or is it once-removed?). And we’re loud. Did I say that already? 🙂

My dad’s parents, whom my brother and I always called Nanny and Nono, immigrated from a small Italian town after my Aunt Sera was born.  This is Nanny’s passport photo…

Leave it to her to look gorgeous in a passport pic.   She was holding my Aunt Sera here.   This photo actually has a stamp from Amantea on the back, which is the small village in Italy where she was from.

My grandparents entered New York by way of Canada, which is where my father and uncle were born. And they came with nothing. They skrimped and saved and worked to give their kids what they never had.

One of my favorite stories from this era is that my grandparents came speaking only Italian. Italian was the first language learned by my Aunt, Uncle, and Father. When Aunt Sera went to kindergarten, she learned English. And from this point forward, Nanny instructed Aunt Sera to only speak to her in English. And this is how she learned the language.

Nanny was a housewife with cooking skills that could make a grown man weep with joy (Joeydid). She grew her own garden which erupted with ginormous tomatoes, cucumbers, peppers, figs and don’t even get me started on the grapes. THE GRAPES. Every year, my brother and I anxiously waited for the grapes to be ready. They were so ripe and juicy that they would just pop right out of the skin. Oh, what I would give for those grapes right now. Seriously. Just one. I’d settle for one. 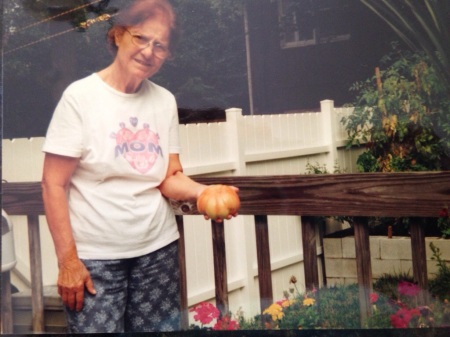 Here’s Nanny modeling one of her huge home-grown tomatoes.

Whenever we’d visit Nanny and Nono’s house, we knew to come hungry because… Boy, was there food. And good food that made it criminally negligent to leave leftovers. Actually, this is how Joey earned major brownie points with the fam. He finished off everybody’s plates and became known as “The Cleaner”. I’m told that Nanny often stated (Insert Italian accent) “Joeeey, he eat everything!”. That’s right. The whopper of Italian compliments.

As I got older, I’d joke that you had to lose five pounds before visiting because you’d surely gain it back by the time you left. 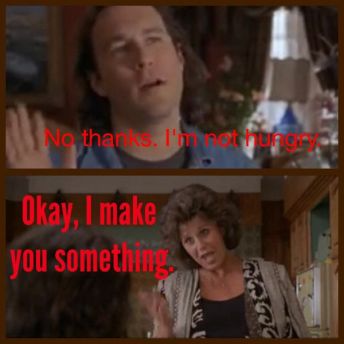 I laughed so hard when I saw this movie because it reminded me of my family so much. A friend of mine also shared this link with me, which pretty much nails it.  I was always just so amazed at how Nanny could take the most basic, simple ingredients and whip up a gourmet meal.

When we were kids, Nanny and Nono would come to our house in the evenings, often times unannounced. Alex and I loved it! Partly because we knew we’d get to stay up late but also because it was just fun. My mom would bust out the Entenmann’s cookies, milk and espresso and we’d play board games or sometimes Alex and I would put on shows (that were usually prompted by me). As first grandchild on that side, I LOVED being the center of attention. You’d ever guess that now, right? 😉

Next to cooking, Nanny was also a lovely artist and seamstress. She painted landscapes and flowers mainly. And her works adorned all of our houses. My dad says that she sewed all of their clothes growing up to save money. I remember her hemming my pants and being amazed that there was no trace of a hem on the outside. Incredible! Clearly, she did not pass on her talent for sewing to me.

One thing she did pass on, though, was her thrifty nature. If anyone knew how to stretch a buck, it was Nanny. The deals she found never ceased to amaze me. And she never splurged. Never bought anything extravagant. Never took pricey vacations. She and Nono lived modestly, so that they could provide for their children and grandchildren. Give us things they never enjoyed themselves. They’re two of the most selfless people I’ve ever encountered.

Another thing that I hope to carry on is the value she placed on the items she felt fortunate enough to have. Allow me to elaborate…

Say hello to my cousin Anthony and Nono… who are sitting with a 41-year-old outdoor umbrella and tablecloth.

Not. Joking. We figured out the age of the set with my grandfather when I was in town last week. 41 years. I remember this set from when I was a small child and it still looks BRAND NEW. As in, the fringe is in perfect condition, the material in perfect shape. No fading. No tears. Just immaculate. And it’s 41 YEARS OLD. 41!

All of my grandparents’ stuff is like this. Perfectly maintained. They were not only thrifty, they never took any of the gifts they had for granted. This is something that I’d love to instill in Lucas.

…Lucas. Speaking of Lucas… Their only great-grandchild. When I was at the end of my pregnancy, they called almost daily. Just to see if there was any news. It was cute. They were so excited. They came to visit a few weeks after he was born and it was awesome to see their faces as they held him.

Even as he crabbily fussed.

The last time we saw Nanny was last summer. And I’m so glad that we got to spend time together so that she could see Lucas older and get to know his bouncing personality better. 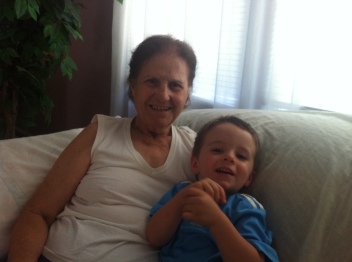 Here are a few more of my favorite pics… 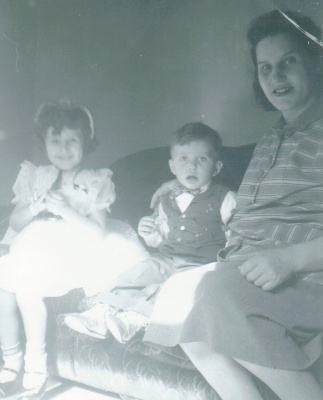 This is Nanny with Aunt Sera and my dad as kids… Doesn’t my dad look like Ralphie from A Christmas Story?

Nanny and Nono when Aunt Sera got married 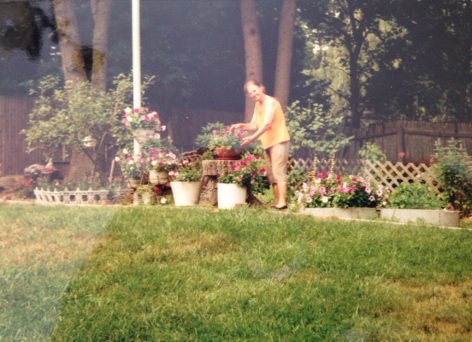 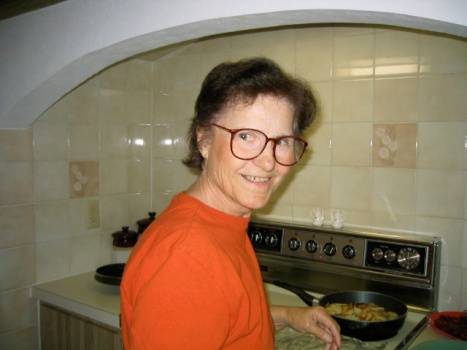 And, of course, a picture of her cooking.  I couldn’t end this post without one.  She just loved it too much.

Nanny was 83 years old when she passed. I wish we could’ve had more time with her but I’m so grateful for the time we did have. She will be forever missed and the great memories that I have because of her will be cherished forever.