“I have too many toys. I want to give them away to the other boys and girls.”

Over the past few weeks, Lucas had stated this proclamation multiple times to both me and Joey. And both of us just stared at him open-mouthed as we wondered who this little guy was and what he’d done with Lucas.

Now, don’t get me wrong… We agreed. The kid was up to his ears in toys. And like many kiddos, he really only played with a few consistently. But, then he stated, “I wanna give ALL my toys away.”

So, last weekend, we took him at his word and Lucas and I got going….

I asked him to put all the toys he wanted to give away into a large cardboard box, and the rest stayed in his toy box. We slowly weeded our way through his entire toy box until we were finished.  I actually found myself stating “You sure you wanna get rid of that?” numerous times.  But he was on a mission.  And incredibly decisive about the whole matter.  So. Strange.

Color me shocked when this is where we ended up at the end of the process….

(And just to clarify the size of this box… It surpassed the height of his bed, although it may not look like it from this angle.)

I moved his dress-up clothes here from the closet since there was so much space.  The foam battle ax was the first gift that my brother gave him, so I made Lucas keep it, though he doesn’t play with it often.

I’ll admit, I held back a few extra toys that I guessed he’d ask for eventually. I hid them in baskets in his closet to reintroduce as “new” later.  And I plan to leave the “give-away box” in the garage for a good month or so just to make sure that he doesn’t ask for anything before we donate them. But, I was so proud of our little guy. He really seemed to know what he was doing. For the small amount of items he wanted to keep, he had good reason for keeping them (“I keep stuffed soccer ball because Mac gave it to me.”, etc.)

Also, no need to think our little man is deprived of toys. The ones he plays with day-in and day out usually end up here…. 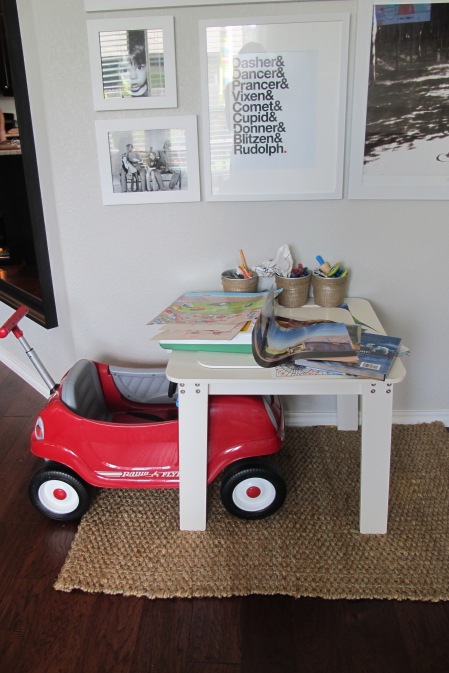 (And, yes.  That’s still my reindeer print in the collage wall… Just when you thought our house was de-Christmassed! Haha! I maintain that Christmas in July is totally a thing. As well as Christmas in every other month. 😉 ) 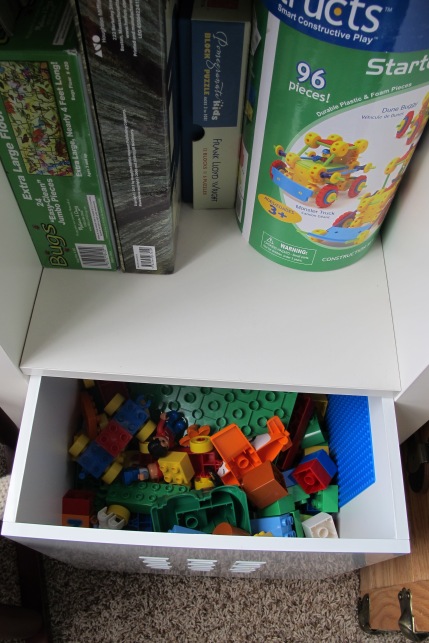 And in the basket beneath his Map table….

Ignore the race track… I’ll get to that in a sec.   It’s kind of funny… Part of me thinks it’s really freeing to walk into his room and not be accosted by a giant pile of toys.  The other part feels slightly sad because it’s sort of empty in there now.  Though, weirdly enough, Lucas seems to be really happy about that.  I’m still scratching my head a little on this one, but I’m not complaining either.

Since we were on a roll, I also made major headway in his closet. It started out looking like this…

And after some purging of clothes that no longer fit, and organizing his remaining toys, we ended up here….

I FINALLY have enough room in there to fit his giant race track.  I was secretly hoping he’d want to part with it (it was the ONE and ONLY toy I truly hoped he’d give away), but much to my dismay, it’s staying.   Before, it had to live out in his room on the floor because it was too large for anywhere else.  I was constantly tripping over it, it fell apart on a regular basis, and Lucas didn’t really play with it often enough to make it worth it.  But the kid just willingly gave up the majority of his toys, and he wanted it, so it stays.   But now… It’s in the closet.  Heehee! (Glee)

And since I’m sort of on a toy rant anyways… do any other parents out there wonder why Melissa and Doug puzzles have no lids??  It drives me absolutely batty. Those pieces get EVERYWHERE. Ugh. But Lucas loves them. So, they stay, too. And let’s face it… They don’t devise crippling plots like the foot-torturing Legos.  So, they’ve got that going for them. Which is nice.

Anyhoo, other miscellaneous and out-of-season items went up high in various baskets and containers in his closet, and the only clothes remaining are ones that fit him well (These are only “dressier” clothes… his other clothes are in the dresser).

I’ll be honest…  I’m half expecting him to reconsider and ask for all his toys back tomorrow.  It’s been about a week so far, though, and he’s only asked for his small Dusty “Cropgrover” (aka: Crophopper) figurine, which I fetched for him.  He hasn’t so much as mentioned the other toys even though the box is located in plain view in the garage.  So, I guess we’ll see.

For the most part, I think he’s pretty excited about it…

And yes, we only take pics in our pajamas.  I swear I dress him upon occasion.  😉

So, that’s one more organizing task marked off the list!  Woo-hoo!  Slowly but surely, Casa de Spragins is getting whipped into shape.