Anybody else out there a fan of garden stools?     I can say that at one point last year I had four.   Four garden stools.   Four.   And I loved every second of that very short period.  Then, my cheapo-guilty-conscience kicked in and I returned three of them.   The keeper was this guy….

…And he was actually a birthday present from my mom, so really, up until recently I hadn’t purchased (and kept) any garden stools at all.  So, reeeallyyy… I could’ve kept another one.  Balls.  Anyways, I love these things.  They’re shiny and clean looking,  jam-packed with style, they don’t take up a ton of space and can be used for additional seating or a fancy place to set a drink.  Versatility.  Always a plus.

I mentioned in this backyard post of yore that I wanted to add a colorful garden stool to our conversation area under the covered porch.  In my head, I wanted a lime green stool to coordinate with our colorful throw pillows (purchased for dirt cheap here).  But, then I never found one.  At least not one for less than 60 beans.   And 60 beans was way too much for me to justify.

Then, one day, I took a quick spin through Ross and spotted a show-stopper of a garden stool stuffed in the back of one of their shelves.  I wasn’t looking for a garden stool at the time (I was actually in search of a suitable shower curtain for our guest bath, the hunt of which I griped about in my last post).   But, there it was.   Right in front of me.  The only garden stool in the store.  In January.  In perfect condition.  Lime green.  And… 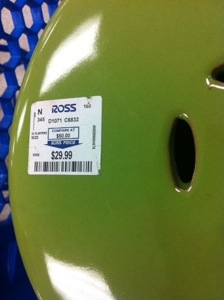 Twenty-Nine-Friggin’-Ninety-Nine!!!  I stared at that price tag for an uncomfortable period of time, lest my eyes were playing tricks on me. But, it was TRUE. And I was ecstatic.

Plus, I’ll tell ya… this guy is the real deal.  Like I said… I’ve had four garden stools, of all different makes and models, and not one of them held a candle to the sheer weight of this dude.  He weighed a TON.  I mean, I consider myself moderately strong (for a pipsqueak).  I lift Lucas all the time.  Garden stools were never a big deal for me to carry.  I moved all four of those beauts all over the house when I had them. Would I want to carry them indefinitely?  Nah.  But across the store/house?  Sure!!    ….But this badboy???   I made it halfway to the front of Ross and had to set him down and hide him under a couple of dresses because he was too heavy for me to make it the full distance.  I retrieved a cart and nearly dropped the full-bodied fella as I hoisted him into the basket.  It was a close call.  Close. Dropping him would’ve been my Cliffhanger moment… when the glove slowly peels off his hand and I scream in slow motion as he plummets to the earth.    Thankfully, I was able to hang on for dear life and he made it into the cart unscathed.

Then, I was faced with… The. Line.

Confession:  If there’s a stupid long line at Ross, I usually just return my stuff to the shelves and leave.   Lately, it seems that I don’t have patience for that place and my soon-to-be-purchased-goods aren’t worth waiting in those crazy lines.  But this time, I did it.  I waited in the longest line I’ve ever seen at a Ross.  ON PURPOSE.   Then, just as I saw the light at the end of the tunnel and stepped up to claim my place as the next person in line, the manager decided it was shift-change.  So, I got to watch them clock in/out, get the registers squared away, etc.  And I waited.   For what seemed like forever.   But, I did it out of love (and cheapness).   And it was worth it.    Every tooth-grinding second.   Lock-jaw is well worth saving thirty bucks, right? 😉

Finally, I got him home. I tried him a few places indoors (whilst dragging him around the house on a sweatshirt) since I haven’t cleaned and set up our patio yet due to the cold. He ended up landing in our front room…

He actually goes really well.  I replaced the previous blue throw for a green one and the touches of lime play really nicely with the painting. Once it’s warm enough, he’ll be relocated outdoors, but until then he brings some shiny contrast to the more cozy textures in the room.      So, anyways, that’s the story of the trials and tribulations I’m willing to take on for a good, inexpensive garden stool. What would you do? 🙂