Hey Ya’ll!  We’re decorating the new pad for Christmas today and I’m totally stoked about it, too.   It’ll be a day full of decorating in our pajamas while watching Elf and eating cookies.  Living the dream, people.  Plus, the fact that we’re in our new house just MAKES IT for me.   I’ve always thought that this house would be great for the holidays and this was unexpectedly confirmed when my Aunt Terry walked into our living room for the first time and stated (with zero prompting) “This is a great Christmas house.”  BAM!  That’s right.  It’s not just me!!!

Anyways, being the nostalgic sap that I am, I decided to cruise through some of my Christmas posts from last year for inspiration.   Since this is a new house with different decor needs, looking back at old projects helps me visually inventory what I already own in one fell swoop (and provides me with ideas for new ways use these items in our new home).  So, in case these may benefit ya’ll as well, here are a few snippets…

For our larger tree, I stuck to a silver, burgundy and green theme last year.  Lots of glittery snowflakes, garland and wire ribbon.   In lieu of a tree skirt, I just used faux sheepskin rugs.  I love that look.  It’s like a little snow mound beneath the tree.

Our “Charlie Brown Tree” is a simple silver tree that I purchased on clearance from Walmart years ago (Humph… that cord makes me twitchy.  Just try to ignore it.  Or tell me you don’t see it to make me feel better.) … 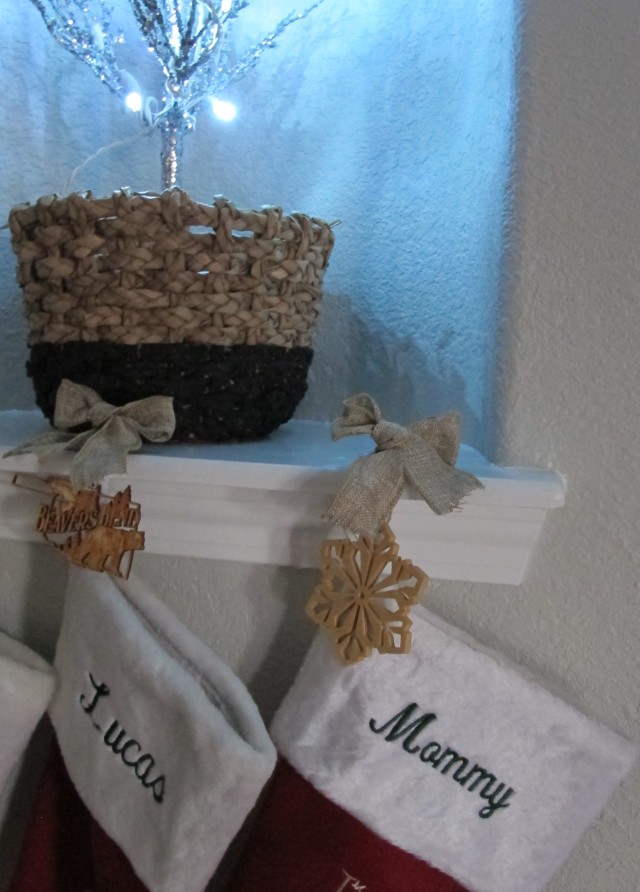 I stuck him in this painted basket for a bit of style, then added some stockings and wood ornaments with burlap bows for style.   These guys adorned our hallway nook in our last house, but need a new locale and look for this house.   Hmmm…. Wheels are turning… 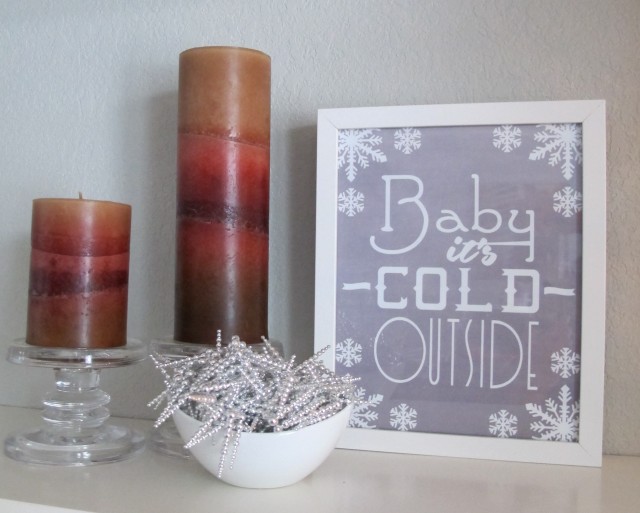 This was one of my favorites.  It was free, easy and added a touch of whimsy to our Christmas decor.   I ended up using four different printables throughout the house.  I still have them and will likely reuse them again.   See the other printables that I utilized here. 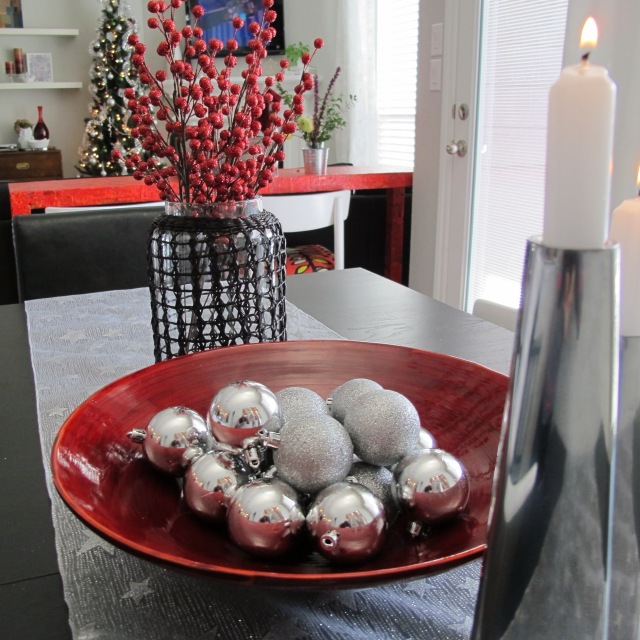 A few simple, cheapo purchases lead to a sophisticated “winter wonderland” feel.   The window hangings tied in perfectly to the trees and centerpiece and really were the icing on the cake!  At least I think so.  😉 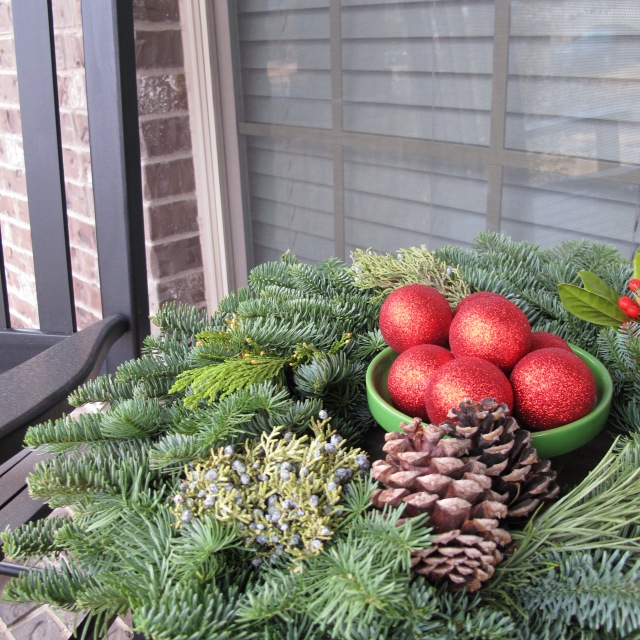 I reused my DIY frame wreath and jazzed it up with a few simple tweaks.  Plus, I used a gorgeous live wreath in a non-traditional way to add a little Christmas spirit to the seating area on our covered porch.

And lastly, this isn’t Christmas decor necessarily, but since gift ideas are always a good thing, here’s how I created simple busts of Lucas on burlap for gifts.  We gave one to each of the grandparents last year… 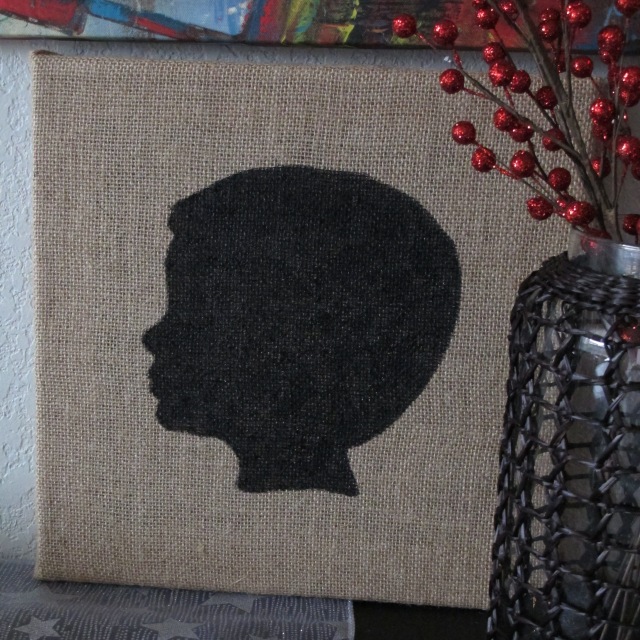 So, now that I’m officially in the Christmas spirit, I’m gonna go get my decorating on.   Ya’ll have a great weekend!!  Let’s start this holiday season off right!  🙂

So, I finally threw out the squishy pumpkins on our doorstep. Ick. And now our porch is slightly more Santa-ready. Not that he uses the porch or anything. But if he wanted to, I wouldn’t be completely embarrassed. At least we’re in the right season now. 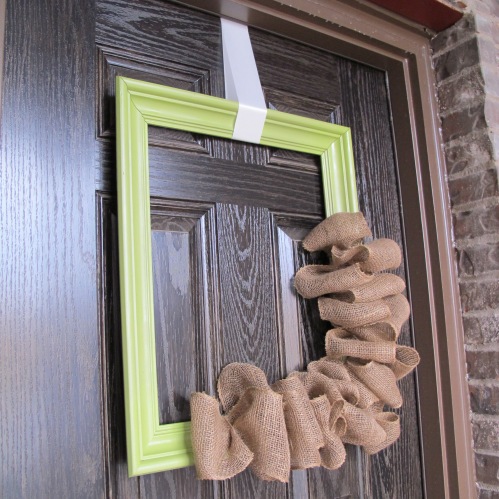 I’ve been wanting to glitz it up for Christmas, well, practically since I made it. I originally had grander plans, but in the interest of time, I decided to simple it down somewhat.

I have to say… So far, my wreath has lasted pretty well. My only complaints are 1. It’s slightly crooked. We need to get some Command Velcro wall-hanging strips to keep the frame level since the burlap side tends to hang lower than the non-burlap side. But, honestly, I haven’t been bothered by it enough to have done it up to this point. And 2. Over time, the burlap began to droop a smidge. I could easily reloop the burlap to make it poofier since it’s simply tied on with twine, but I haven’t gotten around to that either.  I’ll do it eventually, though.  Actually, these are probably more observations than complaints now that I think about it.  Real complaints might prompt me to actually DO something about them.

…And now that I’m adding pictures to this post, I’m realizing just how much the burlap has drooped.  I’d better get on that soon.   Anyhoo, I found the glittery snowflake at Walmart for $3 (It’s the same as my window snowflakes), and simply tied it to the frame with some shiny red ribbon that I had on hand. Then, I added a few ornaments for a little zing. I flanked the door with our white Ikea pots filled with fake poinsettias and added some shimmery curly twigs for interest…

Over by the rocker, I first filled a small ivory and green pot with red ornaments. Super simple and easy. 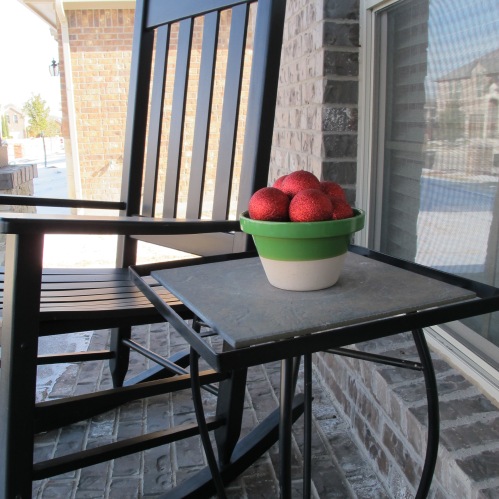 Then, I realized that the live wreath sent to us by Joey’s sweet grandparents needed to be displayed prominently.  I LOVE the annual live wreaths they send us, but unfortunately, we can’t hang them inside (like I really want to) because I’m allergic.   That’s right.  I’m allergic to live Christmas trees and the like.  They give me crazy-intense, sharp sinus headaches which almost feel like migraines.  Weird, huh?    Anyways, since our frame wreath is already taking up residence on our door, I decided to use the live wreath here….

Who doesn’t like a little Oregon greenery to liven up their doorstep???   I love how the rustic greens really make the glittery red ornaments pop.   Thank you bunches, Annie and Poppo!!  We love our wreath, as always!!  🙂

We decided to forgo lights this year with everything that’s gone on.  Christmas shopping needs to be completed first.  And prep for Lucas’s birthday party (..which is tomorrow. Yikes!!).  I know. I’m behind.  Next year, I’ll be on it, though (Stop. Laughing).

So anyways, how is y’all’s Holiday shopping going? Anybody done?