Alright, my friends.   This post may not come as much of a shock if you follow me on Instagram since I already spilled the photographic beans over there.  But, I know that it may be new to some, and I wanted to share the details of these changes, as well as the process that I went through to achieve both functional and pretty lighting.

This little beaut is the Scout 3 Light Flushmount from AllModern and I couldn’t be more thrilled with it.  It was $118 and when I purchased it they didn’t charge me for tax or shipping.  I’m not sure if this deal exists all the time or if I just happened to catch a promotion that they were offering, but I was grateful nonetheless.

When this guy arrived, I was ecstatic.   He’s great quality… solid.  And he looks it, too.   I was actually MORE enamored with him in person than I was when I saw him online which is always a good thing.    I’d initially wanted to try a semi-flushmount in this space for more of a “grand chandelier” feel, but our ceilings are just too low for that.   I’m really glad we went with this one.   It adds style and nice, bright light without being cumbersome.

Here’s a “before” of the space when we moved in for reference.  Remember when our old front door just fell right off??? … 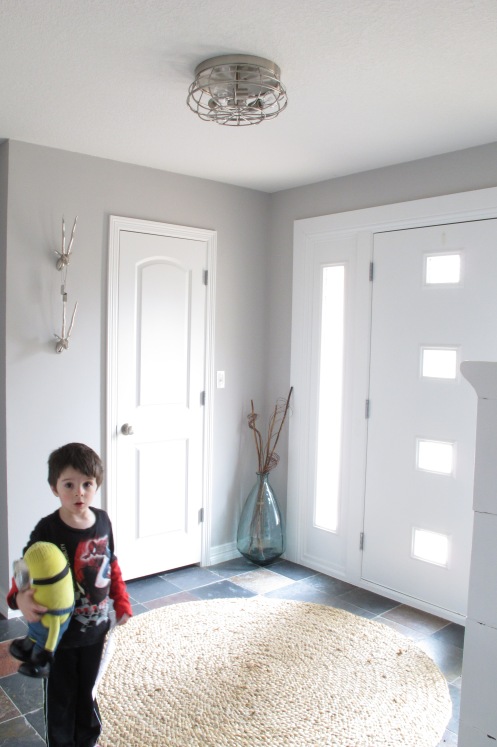 And that’s Lucas perfecting his “Oh, I didn’t realize you were taking a picture” pose.   He literally walked over as I was taking pics and froze with that “surprised” expression on his face long enough to allow the slightly longer exposure to capture it (it was pretty cloudy when I took this).  Dude knows what he’s doing.  Haha!

Here’s a Lucas-free shot of the same view… 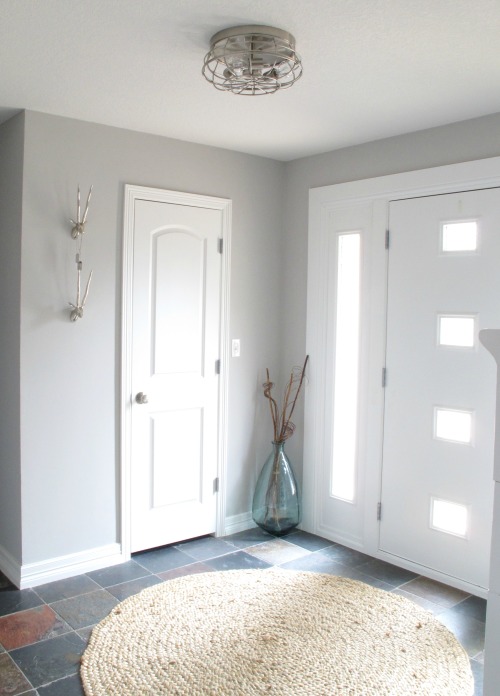 I still have to address the wall directly across from the door (not shown), but aside from that, the foyer is slowly getting close to completion.

Now, onto the other new member of the fam…  My pride and joy of the illumination world: Sputnik….

Did I say obsessed?

How does it feel to be the prettiest gal in the room, Sputnik?

This baby is the Style Selections 18-Light Brushed Nickel Chandelier from Lowe’s.  And it was a steal at $198 plus tax considering that it came with 18 Edison bulbs which typically run about $7-10 each.

But wait… There are no Edison bulbs to be seen, right??

Well, allow me to explain.

After we installed the chandelier, we screwed in the Edison bulbs that came with it and turned it on.  And BOY… were we blinded by the light.  Literally.  And we were hot.   And not in a good way.   Lemme tell ya, EIGHTEEN 60-watt bulbs within close proximity feels a bit like being a hair to close to the sun.   That was a TON of wattage to be just mere feet away. We quickly realized that there was no way we’d be able to host comfortable dinner parties with the current bulbs installed.  NO WAY.

It was a total bummer.

And Joey and I stared at each other in sadness.

So, the next day, I went to Lowes and purchased a bunch of 25-watt globe bulbs in both clear and white, which was the lowest wattage I could find.  I put both in to see which was better (as shown in this iphone pic)…. 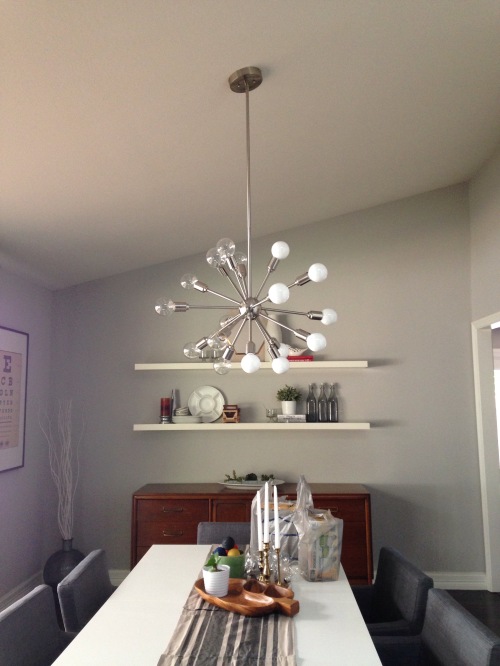 And I LOVED the clear bulbs when the fixture was off.  They were just so elegant and gorgeous.  I even liked their round shape better than the elongated Edison bulbs in this space.  The white bulbs were a bit too “mod” for what I was going for and the stark white color of the bulbs made the other white in the room look dirty.  And I don’t do dirty white.  Dirty martinis, yes.  Dirty white, no.

…once the fixture was on, even the 25-watt clear bulbs (at less than half the wattage of the Edison bulbs) were still too blinding.   That filament was harsh on the retinas for sure, leaving you seeing spots after glancing directly at them.  The white bulbs, on the other hand, were easy to look at and much better tolerated when lit.

I was SO torn.   I REALLY didn’t want the white bulbs, but they seemed to be the most practical option function-wise.  And what’s the point of a pretty fixture if it impedes function?

Then, it hit me!  A dimmer!!!!  We’d install a dimmer switch which would allow us to use the clear bulbs and have control over the light!!!

So, we installed this one…

I’m wanting to say it was about $30 from Home Depot.

And all was right with the world.   I could keep my clear bulbs, but the fixture was no longer blinding since we could adjust the light as needed.  Total win-win.

And now we’re set in terms of Edison bulbs until the END OF TIME.   We have several fixtures that need them, so they’ll be used.  Eventually.

And a “before” of the opposite view…

That fixture is my new favorite thing.   I couldn’t love it more.   Now, if I could just find a rug for this space.  I’m on the hunt but haven’t found exactly what I’m looking for yet.  Hopefully the shopping gods will bestow one on me shortly.

So, that’s where these spaces are currently and it’s safe to say that they’re feeling more like us day by day.

For some reason, lighting is always the last change we make, but it always seems to make the biggest difference.    What are your experiences??

Wah-hoo!!   It’s amazing what a little impending overnight guest does for a little kick in the pants. It’s been a crazy week.   I know I’ve said it before, but I really mean it.   We’re having company this weekend (really, for the first time since moving in), so it’s been a mad dash to try and get some unfinished projects done.   The house is (of course) nowhere near finished (that’ll take YEARS, I’m sure), but we just wanted to clean up a few things that were needing some immediate work.   And in this mad race, I didn’t stop to take “after” pictures until today. #mybad

Anyways, as the days go on, things at the ole’ homestead are slowly coming back together again and my head feels like it’s gradually reattaching to my brain, which is nice.  So, here’s what’s been going on house-wise.  Joey’s been a mad-man out in the backyard (I’ll have a post about that soon), and I’ve been checking off a bunch of items inside.   Among them was the office/guestroom.   Here’s how it looked the last time I showed it to you…

It’s a great room in that it gets really fantastic light in the mornings and has a pretty view out of the window.  Which you can sort of see here (sorry about my photography skills)… 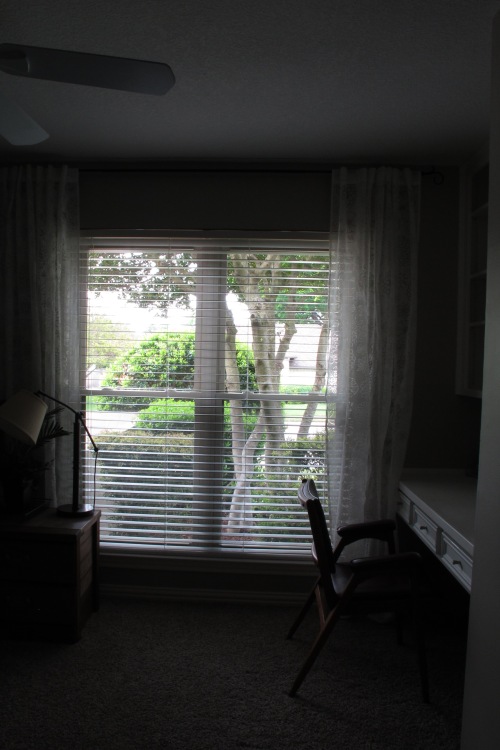 It’s the smallest of our bedrooms, but is still a decent size.   My main issue with it was that it REALLY needed to be painted.   It was the same peach color as the master bath and since it was a flat paint finish, it was really dirty in spots.  Plus, this was the room that we had the flood prior to moving in, so the drywall was patched, but not painted. 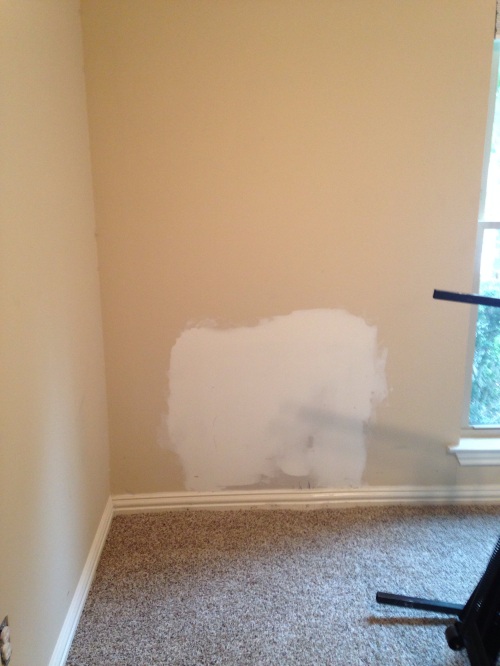 Not a good look if you ask me.

This room contains most the decor remnants from our very first house that managed to survive our multiple moves.   That house had a very “Tuscan” color scheme.  Taupes, greens, reds, with cherry wood accents.  Very different from our last and current houses.   So, the brownish accents that I still liked enough to keep, are pretty much in this space only.   Now, I’ll admit, my taste has changed and I’ve mentally dubbed these as “for now” pieces.  But regardless, I’m grateful to be able to use them to decorate the space (forfree) until I find new stuff to replace them.

With this plan in mind, I wanted to select a paint color that worked with these items, but would also work with a cooler color palette for when I eventually change this stuff out.   And the color that I landed on was Loggia by Sherwin Williams (ie: the same color that we painted our house’s exterior).   Its a neutral taupe tone that has more grey than anything.   It could easily work with cool colors, but fits in swimmingly with warm as well.   Basically, if Joey’s personality was a paint color it’d be Loggia.  He gets along with everyone.

I’d originally intended to get the paint color-matched with a cheaper paint to save some money, but when I went to Lowes I realized that they now sell an affordable line of Sherwin Williams paints!   Perfect!  They were able to simply pull up Loggia in the computer and mix it exactly.   I chose the cheapest paint (Ovation) in an eggshell finish which ran me just over $28.   Not too shabby. Once I got home, I got down to business, which pretty much resembled the state of my brain the past few weeks…

I have to say that was super impressed by the coverage of this paint.   In the words of that guy in that Indiana Jones movie (you know the one ;))… I chose wiiiisely.    Here’s the difference in the peach vs. Loggia…

I loved it immediately.   It’s taupey grey neutrality.  Even in it’s half-wet state.

Once I had the walls painted, I moved everything back, hung some curtains and the art that I already had on hand, which left this… 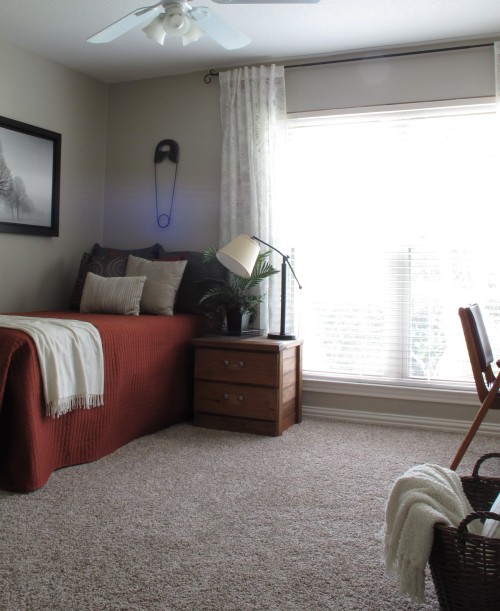 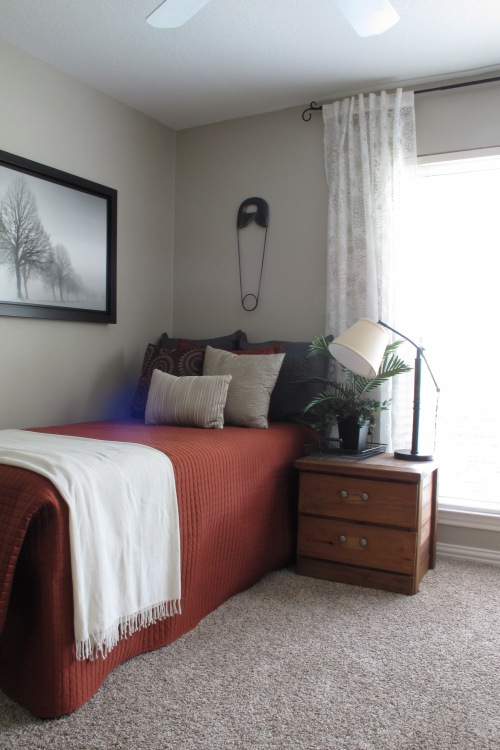 It always amazes me how much a set of curtains adds to a room.

In reassembling the space, I actually tried floating the bed on the adjoining wall (with the head beneath the painting) so that everything wasn’t so crammed against the perimeter, and it looked much better than the current layout.   Then, I realized that functionality-wise, I wanted more floor space.  I sometimes do workout videos in this room and I like just being able to plop down without having to rearrange the furniture.   So, in this case, I’m sacrificing looks for function.  Honestly, I’m just glad to have enough space to do that.  Our last house had such small rooms, that I really didn’t have space to workout in any room without bumping into furniture (even after I’d moved it out of the way).

Here’s the desk area as of now…

I simply styled the shelves more and switched out the desk drawer knobs for those delicate little guys that I found at Target on sale for $5 for a set of 10.   See that old school camera and the lenses on the lower shelf??

I got that as a white elephant gift at a good friend’s Christmas party.  I’m not sure who gave it, but I happen to think its completely awesome.

And lastly the wall that that backs up to the hallway…

I still have some more tweaks that I’d like to do in here…  I’d love to someday get a headboard, jazz up the nightstand, improve the bedding, get a wireless printer so that we can hide that eyesore, and add a nice area rug for interest, but this room definitely jumped leaps and bounds from where it was.  I’m just glad to have this done and to be able to say “…and this is the guest room/office…” minus the “…we still have a ton to do in here.  Pay no attention to the walls…” part. 😉

***For updated pics on this space, check out this (creating a wood-framed art headboard), this (revamping a mid-century nightstand), this (adding a new awesome $12 lamp) and this (creating DIY burlap wall art).***